Violet Heaslip is a supporting character on the animated series WordGirl, voiced by Maria Bamford. She is Becky's best friend and likewisely 10 and a half years old. She shares her friend's love for mythic creatures such as unicorns and pegasi, and real-life animals, Unlike Becky she has significant artistic skill. She organizes herself with her very shy, soft-spoken, poetic and daydreaming attitude; she refuses to display fear when a meteor was coming right at her, even doing a poem on the encouragement of the moment about the occasion. She often appears to have a tenuous grasp of reality.

Violet has medium-length blonde hair with a purple-striped hairclip, Her clothing consists of a long-sleeved purple shirt with a blue overall dress, eggplant-colored tights, and black Mary Jane shoes.

Violet becomes bolder when any of her friends are treated badly or endangered and stands up for them as best she can. Violet also has a Persian pet cat named Priscilla, known earlier in the series as Fluffy, which accompanied Bob Botsford on the class' field trip to Zachary Zany's Candy Factory and also joined her for trick or treating as Captain Huggyface to her WordGirl costume in the Halloween-themed episode "Tobey's Tricks and Treats."

As well as being her best friend, Violet appears to be Becky's artistic mentor, deduced by the two of them painting together in numerous episodes. This implies that Violet cares a lot for Becky. Becky has mentioned feeling awkward visiting Violet's home. This is because it has a handful of rules that Violet tries to enforce which Becky found annoying.

In staying with her kind and compassionate personality, she also is more friendly to Tobey than other characters, even making an attempt to comfort him in "Tobey's Tricks and Treats". When they were very young, Violet beat Tobey in a game of checkers, thus causing the boy to avoid the game, yet still desire to become a checkers champion, which led to the events in the episode "Monkey-Robot Showdown."

Here she becomes "The Framer" and imagines she has superpowers, but she gets defeated by The Butcher.

Here she enters the Young Inventors Challenge and Friendly Competition with a dual Egg-and-Apple slicer she made with Becky (who used a bit super-strength to hold the pieces together), and won the competition for the hunger of the judge's love of free food. Later, WordGirl used the slicer to defeat Tobey's robot, earning Violet yet another trophy (as her invention saved the day). This trophy was later stolen by Victoria Best, and finally returned by WordGirl.

In The Birthday Girl (episode)" Violet found a way to shrink the Birthday Girl down to Eileen, by tricking her into doing something big, instead of something greedy. Violet and Eileen usually have the same birthday (Eileen's actual birthday).

Violet is shown waiting in line for the Billy's music concert, standing behind Shelby Joy and ahead of Tessa. These are girls she had recently attended Becky's birthday with.

Violet as a Mage

Violet finding out Becky is WordGirl

Violet and her cat and mother under mind control in Invasion of the Bunny Lovers. 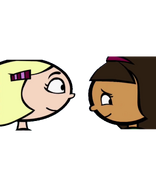 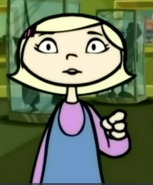 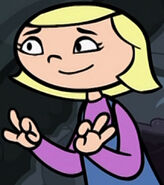