Victoria "Vicky / VB" Best is a child prodigy, the non-super-powered evil counterpart of Becky / WordGirl and the equivalent of Bizarro who made her introduction in her self-titled Season Three episode. As this child's name insists, her parents taught her to be the best at what she does. Despite not having superpowers like WordGirl, Victoria happens to possess strange powers of her own. She is a prodigy, and can perform telekinesis and hypnosis. She has also mastered origami, and seems to be able to bring her creations to "life", as demonstrated in "The Best of the Bests".

Victoria wears a grey sweater with her badge on the pocket (a trophy), a pink skirt, a pastel blue blouse and long black socks with matching shoes. She also wears blue ribbons for earrings and a pearl necklace. Victoria has gold-blonde hair with long braided pigtails with two pastel blue scrunchies on each one.

In her self-titled first appearance, Victoria is introduced as a new student (and villain). In the school auditorium she along with other children are playing recorders, but the children are terrible until Victoria silences the room with her good playing. She is then rewarded with a trophy for it and numerous other ones (see ===Victoria's prizes=== for it) except one trophy for reading which goes to Becky. Her parents Mr. and Mrs. Best then glare at her to take the trophy. Later Victoria hypnotizes Becky and steals her trophy, and when Becky comes to reclaim it, she notices other trophies that Victoria could never have won. She shows again as WordGirl to challenge her against Captain Huggyface in an eating contest. When she loses, she tries to take Huggy's trophy (which is actually a net painted gold) but gets trapped and is forced to give back the trophies she did not earn, including Becky's.

Victoria is returned in the Valentine's Day special Cherish is the Word. She steals all of her classmates' Valentines Day cards, and to make the job quicker, she hypnotizes everyone by playing her recorder, and she makes a run for it when they're still dazed. Later on she is found by WordGirl, but WordGirl is stopped by Tobey, insisting that WordGirl should be his special valentine. When Tobey introduces WordGirl his human-heart shaped chocolate to her, Victoria reacts to this by saying that she should have it because she's the best at everything and taking Tobey's valentine. But Tobey takes it back and defends WordGirl. Upset that Tobey along with Scoops are complimenting WordGirl, she hypnotizes all of them, only this time instead of taking their objects she switches them in each others hands to look like they stole from each other, and then skips away. She later returns in WordGirl's battle with Tobey when Scoops is about to give Violet his Valentine and interrupts them, but WordGirl tricks Victoria into making Tobey's robots go after her. After realizing her error Victoria asks WordGirl to help her and even promises to give the other students their Valentines back.

Victoria makes her third appearance in Crime in the Key of V. When WordGirl is about to be rewarded with another key to the city, Victoria interrupts the ceremony and tells the Mayor the key should be hers because she's the best at everything. WordGirl stops Victoria but is then backed up by her parents who claims Victoria can have the key and be a superhero. When Victoria questions how, her parents reply: "Put your mind to it!" with a creepy red glow in their eyes. Victoria repeats the words along with the eye glow. Later during WordGirl's fight with Amazing Rope Guy, Victoria hypnotizes everyone and takes the Amazing Rope Guy to to seem as if she caught him. At that point everyone turns to Victoria's side and she is even rewarded WordGirl's key to the city. Victoria is later shown at her house with her new sidekick General Smoochington but The Whammer challenges Victoria to a battle. Victoria cannot stop him and is then helped out by WordGirl, who takes her key back afterwards.

In her fourth appearance Don't Mess with the Best, Victoria is finally put out with WordGirl and decides to be the best villain and defeat her once and for all. So by using her recorder, she and General Smoochington steal the villains' weapons. When they find WordGirl and Huggy, they begin to battle. However using the villains' gear and abilities of their own Victoria and General Smoochington succeed in defeating their rivals. But at that moment, the villains arrive to retrieve their weapons. Victoria refuses and shows them her accomplishment in defeating WordGirl but Dr. Two-Brains does not realize her and hands her a ray to "finish the job". Victoria hesitates and backs down causing the villains to mock her. Upset by this, Victoria aims the ray at them but winds up shooting nacho cheese in her face making the villains go after her. Victoria then pleads for help from WordGirl. The heroine decides to help and saves them.

In her fifth appearance Victoria is the Best...WordGirl?, Scoops believes Victoria is WordGirl after taking a photo of her after WordGirl disappears behind a building. Becky does not realizes him (obviously), so he asks Victoria herself. Before saying no, Victoria realizes that this would be her chance to be the best, so she says "yes" and has the whole city in the palm of her hand. Later she and Smoochington (who was portraying Huggy) are being interviewed by TJ and Johnson at his treehouse. But when Scoops appears and asks Victoria to transform into WordGirl, Victoria hesitates until she sees WordGirl coming and says "yes" and she and Smoochington leave the treehouse as the actual WordGirl and Huggy come in. When the heroes go to Victoria's house for a battle, Victoria traps them in her trophy shelf while Smoochington guards them. However, many citizens appear at Victoria's door for help, making it the perfect distraction for WordGirl to escape. When WordGirl breaks free, she catches Victoria and takes a photo of both of them in it proving that they are two different people. Despite her plan failing, Victoria is really happy for it was the best lie and crime she's ever done.

In her sixth episode There's No V in Team Becky causes Victoria and herself to publicly lose the city quiz bowl championship losing them the prize of a giant golden trophy. After the event Victoria steals the trophy from their rival teammates. When WordGirl investigates Victoria plays innocent, but on her way out WordGirl tells Victoria that everyone saw the other team win and that it is not hers. After that Victoria decides to have a rematch with the other team, when Becky finds out she tries to see if Victoria will give her another chance Victoria accepts and continues. Unfortunately, they lose a second time, causing Victoria to leave the trophy.

Victoria officially makes her seventh appearance in World’s Best Dad. While at the supermarket she and General Smoochington overhear Becky and her dad's conversation about the world records and how he'll be the best. Wanting to keep her title as the best, Victoria goes out for the record. She then arrives at the park after Tim, Bob, and Becky, on a unicycle with Smoochington carrying watermelons. She then beats Tim's record by eight seconds and is given his plaque that he recently had. The next day at her house, Victoria looks through the book of records to find her page, when she does she notices records nobody has ever attempted and so pledges to do them all. Later that week, she once again returned after the Botsfords and repeatedly beats Tim until Becky comes up with a new record. Victoria is now upset by this because she did not practice but realizes she can have Tim show her and then kidnaps him with her recorder powers. After Victoria's plan is thwarted by WordGirl, she then returns Tim back to the park only to find General Smoochington successfully completing the new record once again claiming victory for the Bests.

Victoria's final appearance is in The Best of the Bests. In this episode, her younger brother Victor is introduced, and Victor too is a good prodigy but unlike his sister he is actually friends with his Botsford counterpart TJ who invites them over for a playdate. TJ and Victor decide to play basketball while Victoria and Becky try to get along (well Victoria sort of tries while Becky just gets annoyed by whatever Victoria does.) While playing, Victor has an idea: To have a shooting contest with their sisters. The girls accept, although Victor and Victoria are the only ones playing. Victoria wins causing her brother to moan. Victoria starts to self celebrate her victory until it is interrupted by both an bothered Becky and TJ's fake call for WordGirl. Victor plans to steal WordGirl's powers with a machine he created and succeeds. However Victoria has a plan to get them back... WordGirl says that Victor did never take ALL of her powers and explains that it's a secret power. When Victor comes over, Victoria turns on the machine, giving WordGirl her powers back and destroys the machine.

When Victoria is first introduced her personality is fairly simple, to be the best and better than others. But after "Cherish is the Word", Victoria's personality slowly begins to alter. She needs more, such as winning bigger awards, being more skilled at things and triumphing over important people like WordGirl. However, Victoria is not really evil; in her first appearance, "Victoria Best," her parents constantly give her an creepy red glare whenever she loses, making that the real reason why she is the way she is today. They do the same thing to her in "Crime in the Key of V"; however, this time to make her do anything as long as she gets the key. What other characters or WordGirl fans never see, is that Victoria's parents will really hate her if she does not win; they have possibly done this to her for so long that it just grows into a bad habit and thus the truth behind the reason she steals awards she did not win. Victoria's strengths on the other hand are quite unique. Even though she does not having powers like WordGirl, Victoria still has abilities of her own; for example, her recorder power is very helpful. When she plays it very well, she can hypnotize others then use her telekinetic eye beams to take the objects. Victoria does have other abilities besides these two, in "Victoria is the Best...WordGirl?" she hooks her recorder to an amplifier, blowing away her victims instead of hypnotizing them. In an odd way, Victoria's powers are quite similar to Becky's. Victoria's hypnotism to Becky/WordGirl's fast zoomings into catching or trapping people and Victoria's eye beams to Becky's superstrength for Victoria has lifted things three times her size with her beams. Even Victoria saying she's the best at something might be considered analogous to WordGirl's definitions. Still, no two powers are equivalent in any significant way, however these moves or abilities have never been named.

Despite not having real powers, Victoria has good abilities or even powers of her own such as:

One major difference between Becky and Victoria are weaknesses. Though WordGirl has been defeated before, she does never appear to technically have a weakness unless it's Lexonite or if separated from Huggy on some occasions. Victoria on the other hand has several weaknesses some of them would sometimes be exploited by WordGirl.

Victoria Best "defeated" WordGirl. Are you kidding me? 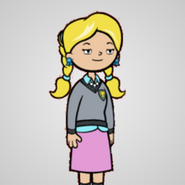