Todd "Scoops" Ming is a character in WordGirl. He is a 10-year-old boy who works as a news reporter for the school newspaper The Daily Rag. He is one of Becky Botsford's friends. Becky appears to have a crush on him, which he does not appear to be aware of or reciprocate.

Todd's dream is to work for The Big City Times and was able to cover a story on Granny May in the episode "Bonkers for Bingo" after being hired by the paper's director, Woodward Bernstein (whose name is a reference to Bob Woodward and Carl Bernstein, the journalists who exposed the Watergate scandal). However, he still has a long way to go in order to be the famous ace reporter he wants to be. Even Becky agrees (sometimes, and rather reluctantly) that his articles can be rather dull. According to the official WordGirl website: Scoops is a reporter on The Daily Rag, Woodview Elementary's school newspaper. Scoops desperately wants to be an ace reporter. He's a go-getter who knows there are a thousand stories in the big city and he wants to be the first to report them, especially uncovering WordGirl's identity. Becky has a secret crush on Scoops and is somehow always able to get him an inside story on WordGirl.

He is desperate to figure out WordGirl's secret identity and is constantly on the scene for any evidence. At one point, Todd claimed WordGirl is much older than she looks by "reporter's instinct" and also that he had ruled out everyone he knew as being WordGirl. However, in the episode Vocab Bee, he began to deduce from an abundance of obvious clues that Becky was WordGirl. Becky managed to throw him off by purposefully defining a simple word (perfect) incorrectly at the Vocab Bee. He does eventually discover that Becky is WordGirl in Invasion of the Bunny Lovers.

The oblivious Todd has a high opinion of himself and doesn't hesitate to take credit for anything he might possibly have had to do with, such as the time he retold the story of Romeo and Juliet during the episode "Becky and the Bard". During said episode, it was also revealed he doesn't know how to take stage direction correctly, as he read all his lines in addition to the direction. Because of this, he managed to be casted as the Orchard Wall.

Becky has always had a crush on Scoops, but he has never expressed any romantic interest in her. However, they have always shared a special relationship. In the episode Invasion of The Bunny Lovers, Scoops discovers that Becky is WordGirl when she is forced to rescue him from a mob of people who are under mind control. He then has to choose between revealing her, or protecting her identity to help her continue saving the city. In the end, he chooses to respect her privacy, and their friendship grows stronger as a result.

It is also seen that he shares a special friendship for Violet Heaslip. In Cherish is the Word, he asks Violet to be his Valentine, which she accepted. In The Rise of Miss Power they were also seen eating ice cream and holding hands. In Time-Out with Two-Brains, Becky demonstrates that she is somewhat jealous of this relationship: Scoops and Violet are walking together in the park when time is stopped, and Becky/WordGirl slyly turns Scoops 180 degrees, so they will end up walking in opposite directions and losing track of one another.

Scoops seems to be somewhat fearful of Tobey McCallister III, as seen in Cherish is the Word. Tobey had challenged Scoops to a duel, resulting in Scoops passing out and later writing a goodbye article to readers of The Daily Rag. In other episodes, such as Talent Show Tobey, Scoops is shown to be less scared of Tobey. The both of them compete against each other in Fair City's talent show, and shove each other in the process. 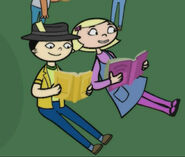