Theodore McCallister III is the secondary antagonist of WordGirl.

He is around Becky's age and in some episodes, he appears to be in Becky's school. Theodore is a happy English boy genius that specializes in building enormous robots, which he uses to destroy things. His robots seem to be used modestly for destructive purposes, but they have shows a wide array of abilities, such as food-making, cabin-building, checker-playing, painting, competing in athletic events, etc.

Tobey is a brilliant planner and a smart student, but extremely non-athletic. He goes as far as to have a robot win a field day contest in his place in the episode "Field Day Fun with Robo-Tobey," only to be disqualified when the truth is revealed. He is very quiet most of the time, except for when he loses his temper and sets his robots on people. He is shown sometimes to be very nice to others, but most of the time he is not, and rude towards them. Tobey dislikes losing, and will often become angry when he does.

Tobey is also rather charismatic, though his charms fail to have any effect on WordGirl. Tobey is clearly bad and evil, but his motivations for being so are not villainous. Most of the villains on the series attempt to steal money, food, or other valuable items. Tobey, on the other hand, has an obsessive crush on WordGirl--though he would never admit this to anyone and has argued more than once to the contrary-- and often concocts funny and destructive plans simply to impress her or win her heart. He often demands that if he can defeat her with his robots, she must tell him her secret identity and go out for ice cream with him. Tobey owns a WordGirl scrapbook with newspaper clippings and other objects, as well as a WordGirl doll that lies on his bed. Though he and WordGirl frequently argue, they occasionally show they do actually have a great deal together, such as in the episodes "Department Store Tobey", "Have You Seen the Remote?", and in the episode "Tobey Goes Good". Unfortunately, Tobey gets out of hand after losing to Violet to the point that that he almost squeezes WordGirl using his robot when she tries to stop him.

Tobey has short blond hair that sticks up in the back, pale skin, round glasses, and a well-built stature. His typical outfit of a blue shirt with an orange vest over it, a red bow-tie, brown pants hold up with a darker brown belt, and brown shoes similarly to Becky's he wears white knee socks with stripes along the cuff's circumference.

He wears his robot-building outfit over his usual outfit. Most visible is his white apron with the design of one of Tobey's standard robots on the front with two pockets, one of which has a screwdriver and a hammer. On top of his glasses are what appear to be a pair of goggles with the right lens blue and the left lens red. On top of Tobey's head is an elaborate helmet with a bright green chinstrap and two bright red and blue buttons on top.

WordGirl's first encounter with Tobey happened during "Play Date". At first, WordGirl simply knew his name from the label on the bottom of one of the destructive robots' feet, which she found after she destroyed them. Later, when she returned home, Tobey (whose mother works with Sally at the district attorney's office) wasn't at her home for a scheduled "playdate" by both their mothers, Tobey noticed that Becky was in possession of his lost remote, and when he voiced this fact the two kids deduced the other's villainous and heroic identities respectively (though while Tobey admitted to his identity, Becky denied being WordGirl). To try to prove Becky was WordGirl, he snatched his remote back and summoned one of his giant robots and gave her a limited amount of time to either stop the robot or have her house destroyed. Becky employed a backup plan, in which Bob dressed as WordGirl and, while Tobey was distracted with the decoy, she destroyed the robot. Tobey decided that Becky was not likely WordGirl and the two have been in a sort of rivalry since.

Another time when Tobey deduces the truth about Becky is in the episode "By Jove, You've Wrecked My Robot", in which he comes over to have a playdate with Becky and tells her that if she tries to turn into WordGirl, he will use his robots to destroy the city. Becky continues to deny being WordGirl, even after Tobey shows WordGirl some Polaroids of WordGirl with Becky's shoes on (due to a lapse in judgement by Captain Huggy Face) and states that they look exactly alike. Becky and Tobey play a parody of Battleship with toy robots connected to their gigantic counterparts in the city, and Becky eventually has to result to cheating through Walkie-Talkies with Huggy. Tobey does not appear to care when this is discovered, he knows that Becky is WordGirl because she hasn't yet attempted to defeat the robots. WordGirl sends Bob off to defeat the robots for her, using a WordGirl doll to fool Tobey's surveillance cameras. Tobey admits that Becky is not WordGirl, much to her relief.

Tobey's crush on WordGirl was pointed out by Dr. Two-Brains in the episode "Mousezilla" which was commented on as a "silly schoolboy crush". Tobey had tried to deny it but was proven otherwise when he tried to stop Dr. Two-Brains from crushing her with Mousezilla's whiskers by stating "Uh, surely there's a more diabolical way to teach her a lesson." Whether Dr. Two-Brains still holds this over his head or not is unknown. The Narrator has also made a point of Tobey's crush, in both "Tobey or Consequences" and "Best Fan Club Meeting Ever".

Tobey's mother Claire McCallister is the only authority he dreads, and when she’s aware of his mischievous deeds she often grabs him by the ear and leads him away to be punished, ignoring any excuses he may give. There is no sign of Tobey's father in the show, though he must have one due to being the third Theodore McCallister.

Tobey has said he got his start from a robotics kit, which included his first remote (and a tracking device for said remote). There must have been some reason for Claire McCallister to consider giving her son a kit, especially one that allows him to become a villain, but no explanation is given in the show. Though, it could be very well likely that it was his father who gave him the kit. In "Oh, Holiday Cheese", Tobey's robot puts the star on a giant holiday tree, earning him approval from his mother.

In the episode "Monkey-Robot Showdown", we see a piece of Tobey's childhood where Tobey had lost a game of checkers to Violet, thus giving the reason why he doesn't compete in the game at his current age anymore.

Tobey as a Toddler 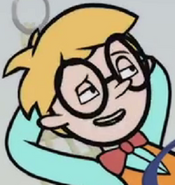 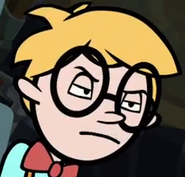 "I'LL GET YOU AND WORDGIRL IF IT'S THE LAST THING I'VE EVER DO!!! 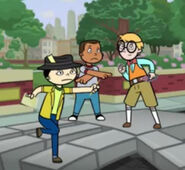 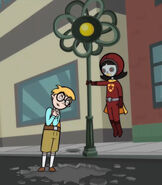 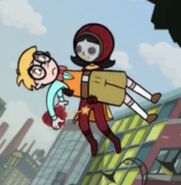 How and why is his ear doing that?