The Whammer is a villain of WordGirl. He once was a sidekick and now a solo supervillain. He is equivalent to The Shocker from Spider-Man.

Being one out of five that have super-strength, with the others being WordGirl, Eileen, Nocan, and Miss Power. He shows his power in "Sidekicked to the Curb", by moving two monster trucks by tying them to his waist, and next lifting two yachts out of the water. In "Theme Park WHAMpage", he crushes a whack-a-mole style game with his fist and lifts a Ferris wheel. In "Wham Up", he skips a stone from a dock and hits a small sailboat, sinking it instantly. His other power as well as strength, is the ability to create sonic destructive blast waves from his fists by ‘whamming’ them together, hence being called 'The Whammer'. The best representation of this power is the episode "Crime in the Key of V", where the Whammer creates a particularly destructive sonic wave called “The Whammer‘s Wham-corder” by tapping his index fingers together. The attack of course misses the target (WordGirl), but instead hits a satellite with bacon wings. In the episode "Gift Pony", The Whammer tries to take down WordGirl with two large metal fists that create super waves greater than before.

The Whammer is one colorful character when it come to clothing. He is usually clothed in a blue leotard with a large grey collar and shoulder pad like top. A wrestling belt is always around his waist and red shorts are under the leotard. He always wears brown cowboy boots, and Celtic warrior "not a Viking" helmet. A purple and orange mask as well as purple and yellow gloves are another part of his attire. Under his helmet is a neon green Mohawk. In "A World Without WordGirl", he is shown as one of Chuck's cops. He is no longer wearing his mask and outfit. His helmet has been changed to have ketchup and mustard tubes instead of two horns. The Coach once thought he was a professional wrestler instead of a super villain.

The Whammer eats large amounts of food, especially when it comes to hot dogs. He likes yellow mustard on his hotdogs in "Thorn in the Sidekick". It soon changes to hot dogs with chocolate, "Theme park Wham-page". He never finishes any of the foods that he gets, as seen in "Whammer Anniversary", when he orders The Ark, a giant sundae made with “two scoops of every flavor of ice cream, covered with a bucket of hot fudge, covered with a bucket of cold fudge, and a barrel of strawberry sauce, flanked by two giant bananas, then is garnished with enough nuts to last a village of squirrels all winter, and finishing touch is a mountain of whipped cream so high that you’ll need a ladder to reach the top.” He got so far as to eat the coldest scoop from the back freezer until he got a brain freeze twice. Soon he makes a pie for the Coach’s class in "Villain School", but the entire pie is made of butter sticks, which, when he pulls the pie out of the oven, finds that the butter is not melted.

The Whammer is often seen as a sidekick to many major villains. He has teamed up with a few villains from his long run on the show: Chuck the Evil Sandwich-Making Guy in “Thorn in the Sidekick", “Escape Wham”, and "One Last Sandwich", and The Butcher in “Too Loud Crew”. He also gets Amazing Rope Guy tangled in his own rope in “Sidekicked to the Curb”. He even tries to help WordGirl find Captain Huggy Face in “Wham Up”. He also works in the same copy shop as Beatrice Bixby (alias Lady Redundant Woman) only to be let go for blasting the store in an excited Wham, also in “Wham Up”. In the same episode once more, he tries to work for the Baker, only to be fired for licking the cake he was to make for a child, on which he wrote “Happy Wham Day, Whammer”. He soon tried to be, in usage of the pun, “second fiddle” to a professional violinist, only to play the violin as a guitar.

He is shown to live in an old gym (as reavealed in “Escape Wham”), that is decorated by old gym equipment. His phone is also shaped like a dumbbell weight.  In this case dumbbell is also a term that insults someone’s intelligence, making it a double entente, since a dumbbell phone also marks his strength, it being a tool for building muscle. In other episodes, “Villain School” and “Too Loud Crew”, it shows that he also lives in an old apartment which is used by the Coach for his seminars. The Whammer has a softer side, when it comes to pillows and plush animals. In “Thorn in the Sidekick”, it shows that he loves pillows that are consequently called “Whammers”. They later appear in “Escape Wham”, when the Whammer sits on his bed to call Chuck the Evil Sandwich Making Guy to check on him in jail. In “Too Loud Crew”, he teams up with the Butcher to steal a meat-filled pillow, which he then punches the meat out of in excitement. Soon he gets a few plush animals in “Theme Park WHAMpage”, the first being a stuffed doe, which he cuddles and hugs, along with an octopus with a top hat and a large mouth bass, of which soon disappears when he is on the Merry-go-Round.

The Whammer getting ready to 'wham' his fists together 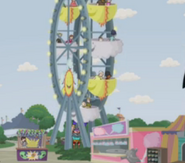 The Whammer lifting a Ferris wheel

The Whammer hurling the Ferris wheel

In his Wham Ship
Add a photo to this gallery
Retrieved from "https://wordgirl.fandom.com/wiki/The_Whammer?oldid=81305"
Community content is available under CC-BY-SA unless otherwise noted.