The Butcher is a major antagonist in WordGirl.

His specialty is meat-related crimes, and has the ability to produce copious amounts of any kind of meat by simply calling it out (though this power is nullified by tofu). He is considered one of WordGirl's deadliest foes.

Although The Butcher is quite large and somewhat imposing, he has a soft-spot in his heart. He’s sensitive about various subjects, falls in love at first sight with one of Lady Redundant Woman's duplicates and dotes on Li'l Mittens (and subsequently begins to panic and even sheds tears when the feline disappears). Although his age is unknown, it's presumed that he's around 40 years of age.

The Butcher displays a desire to correct his deficiencies in English, but the furthest he has gotten is improving his enunciation. After finding that there was more to language-improvement than just that, he seems to have dropped the more careful style of speaking.

The Butcher is dressed in typical butcher attire, but he also very frequently butchers the English language (much to the irritation of WordGirl). Initially, WordGirl has difficulty with this villain and cannot figure out how to overcome his meat-attacks. She consults her friend and ally Professor Boxleitner (who shortly after is transformed into Dr. Two-Brains in an experiment gone horribly wrong) and while consulting him realized that Captain Huggy Face and his colossal hunger is the key. Since then, Huggy has generally been in charge of handling the meat attacks, devouring astounding amounts of meat and thus rendering the attacks ineffective. Since this, Huggy has occasionally failed, especially if he, WordGirl, or both are distracted, such as in the episode "Meat with a Side of Cute", when they can't resist staring at his adorable kitten sidekick Li'l Mittens.

eing a criminal and all, The Butcher does seem to get mildly annoyed and agitated when WordGirl stops him from lining his pockets with stolen money, and usually schemes of ways to best her. Despite this, they seem to have no personal issue with one another, and treat their outings more like a job then anything else, and seem to get along decently when not at odds. This is further proven when The Butcher himself claims that "they get along pretty good when they're not fighting". The Butcher also has no problems with opening up to WordGirl a bit, and will talk about anything that seems to be bothering him with her (example: His poor pronunciation skills, issues with his father, and losing his meat powers) as he considers her a good listener, and WordGirl herself on occasion openly expresses issues she has going on in her life at the moment (example: T.J.'s competitive nature when it comes to games, her father being her teacher, her and Scoops fighting and so on), which he relates to and tries his best to give decent advise.

That being said, they’re at odds a lot and WordGirl shows multiple times that she gets annoyed at his mispronunciation of words, and will stop in the middle of battles to correct him because it bothers her that much. At one point, when they explore a secret cave with him (as Becky Botsford) she’s pretty clearly annoyed by his villainous nature, not that he cares.

Kid Potato is the Butcher's father, first introduced in "Meat My Dad". Kid Potato can be very critical of his son criticizing his posture, costume, and how he deals with WordGirl. The Butcher cares about him very much, but unfortunately doesn't agree with most of his father's views. Kid Potato wanted to create a father-son villain duo with his son "Meat and Potatoes" but by the end of "Meat My Dad", accepts that his son wants to be The Butcher instead. In "Meat-Life Crisis" The Butcher comes to work with his dad when he (temporarily) loses his powers. In "My Dad, My Teacher, My Dad, My Teacher" Kid Potato keeps criticizing his son to the point of Wordgirl calling attention to it. Kid Potato even says, "But he keeps doing everything wrong!" while he and the Butcher rob the bank.

In the episode "The Young and the Meatless", The Butcher falls in love at first sight upon meeting Dupey (one of Lady Redundant Woman's duplicates). Their romance doesn't last long however, as Dupey breaks up with him under the realization that she can't be with him since she‘s a vegetarian. This leaves The Butcher devastated. 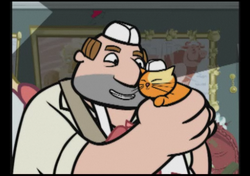