Though he for the most part appears to be a normal human, in the episode "The Good, The Bad, And The Chucky" during a game of hide and seek with Becky and Violet, he exhibits the ability to camouflage perfectly into surroundings, indicating that he may possess some kind of latent mutant ability.

He usually wears a white-ish/grey T-shirt, with red rims on his sleeves and collar, and blue pants. He has short brown hair and freckles.

TJ is shown to be stubborn and somewhat mean and annoying to Becky, as most siblings are. However, he is shown to respect and look up to her. He has been described as a nuisance, as in the episode "Slumber Party Pooper", he annoys and interrupts Becky's slumber party. TJ also has a soft side, especially towards WordGirl and her favorite show, "The Pretty Princess and Magic Pony Power Hour".

He is also WordGirl's biggest fan and is completely obsessed with her. He is also the president of the WordGirl FanClub and has most of her merchandise. TJ may also have some romantic feelings for her (like Tobey) as seen in the episode "Cherish is the Word" when he brings her a heart-shaped valentine card.

TJ plays for a baseball team whose mascot is an octopus.

TJ Bostford was born to Tim and Sally sometime after they found Becky. He grew up to love and idolize WordGirl, and would always support her even if the rest of the city didn't, as shown in the episodes "Down with Word Up" and "Two-Brains Forgets". The only times he rejects her are when he finds out she is Becky, though this is cancelled by Dr.Two-Brains' amnesia ray. And in the episode "I think I'm a Clone Now", he thinks WordGirl is committing crimes thanks to Lady Redundant Woman, but he returns to his love for WordGirl after Lady Redundant Woman is found out and arrested.

TJ is very good at baseball and plays for a team whose mascot is an octopus with a headband on and holding a baseball bat. At one time, TJ hits a homerun which goes out of the park, accidently hitting The Amazing Rope Guy, stopping him from getting away with a bag of jewelry. The shop owner is extremely grateful and thanks TJ. Someone dubbed him the "The Home Run King", and the whole city caught on. The next day, the newspaper announed that TJ was offically known as "The Home Run King", and TJ made himself a costume by wearing crown with pictures of hot-dog knights over his baseball uniform. Later that day, TJ is given a key to the city by The Mayor (much to Becky's chagrin), and is declared the city's new protector. He is also given the bat signal, which would be shone into the sky whenever there was trouble. TJ is then allowed to play video games and eat doughnuts all day, claiming that doughnuts gave him his extraordinary strength, and he had to sit by the window to watch for the bat signal (but he still had to go to school). The bat signal does eventually appear in the sky later that day, and TJ rushes to the rescue. He finds Dr. Two-Brains holding the Mayor hostage, and tries to stop him by hitting a baseball at him. Unfortunately, it doesn't do anything, and TJ is tied up too. Fortunately, WordGirl arrives just in time and saves the day. TJ realizes that he really isn't a superhero and decides to give up crime fighting. The Mayor then reclaims WordGirl as the city's protector, and TJ has never become a superhero again.

Becky TJ and Becky have a typical sibling relationship. He often annoys her by interfering with her activities, and occasionally her superhero duties (though not to his knowledge). He thinks of her of nerdy and uncool, but doesn't hate her. He shows regret for upsetting her, such as when he accidentally breaks one of her unicorn figures in the episode "Chuck's Brother". There are also times when he goes out of his way to help her, like asking the bus driver to wait for her when Becky is running late.

Sally TJ and his mother don't seem to spend much time alone together, but they do participate in group activities such as family outings often. When they do interact, they're usually friendly. The one exception to this is "The Rise of Miss Power". He disrespects Sally by disagreeing with her in a rude way and then laughs at her.

Tim TJ and his father appear to be close. Tim often gives TJ very honest advice. He's more patient with him than anybody else, and affectionately refers to him by the nickname 'sport'. They even go on a camping trip together.

Johnson Johnson displays an immense adoration of TJ, so much so that he often mimics him. In Best Fanclub Meeting Ever he can be seen wearing a shirt with TJ's face on it. He became extremely sad when TJ began focusing all of his attention on Chazz. Although the subject hasn't been directly addressed in the show, Liz Breen, writer and associate producer of Wordgirl, has confirmed that they are a couple.

Chazz TJ was enthralled by Chazz when he moved to town. He thought he was cool and tried to gain his approval by imitating him. Eventually he realized Chazz wasn't someone he should model himself after because he tried to make him misbehave for the sake of other people's approval. He no longer is interested in being his friend. 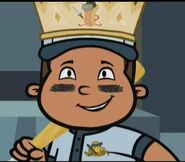 with the soccer team

trying to interfere with Becky's baking, with Sally watching

walking down the sidewalk with Bob and Becky

watching TV with Bob and Becky

in the back seat with Bob and Becky

Cherish is the Word

carrying his WordGirl doll beside Violet and Becky's other guests, Shelby and Tessa and Emma
Add a photo to this gallery

Retrieved from "https://wordgirl.fandom.com/wiki/TJ_Botsford?oldid=86464"
Community content is available under CC-BY-SA unless otherwise noted.