Start a Wiki
Miss Power is the main antagonist of the WordGirl episodes The Rise of Miss Power Part 1 and Part 2, and The Rise of Miss Power Part 3 and Part 4. She and WordGirl share most of the same powers, although Miss Power is more adept at these things. However, Miss Power uses mean words to knock villains down rather than fight them without getting harsh, setting her and WordGirl apart. In the movie, she came to Earth with her sidekick, Colonel Giggle Cheeks. She told WordGirl that she was going to teach her how to be a better superhero. WordGirl idolized Miss Power in the beginning, despite her usage of mean words.

Captain Huggy Face, however, remained suspicious of her for most of the episode. Miss Power influenced WordGirl to use mean words as well, and she did. But when the name-calling got too far, WordGirl stood up to Miss Power, telling her that she needed to stop. This outraged Miss Power, and she revealed to WordGirl that she had been using her for her power. She revealed to WordGirl not only the fact that her original ploy was for them to rule the world together, but also what was underneath her bangs: green skin and a yellow, snake-like eye. Miss Power then flew back to Earth and began to put anyone who defied her in jail. Even when all of the city's villains stood up to her, they were all defeated. However, WordGirl managed to stop her by not letting her bullying power affect her. Miss Power fled from Earth, stating that as long as she quit, she didn't lose. WordGirl ignored the harsh words Miss Power said her when she called WordGirl weak and little, WordGirl used the tactic of saying the opposite of the insult, saying she would grow and get stronger which made Miss Power quit the battle and leave the planet in shame.

"You don't deserve to wear this!" *rips WordGirl's star insignia*

The voice of Miss Power 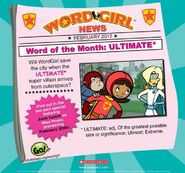 featured in Word of the Month

Add a photo to this gallery
Retrieved from "https://wordgirl.fandom.com/wiki/Miss_Power?oldid=89807"
Community content is available under CC-BY-SA unless otherwise noted.