Start a Wiki
May I Have a Word? is an animated game-show segment shown between and at the end of episodes on WordGirl. It features the host, Beau Handsome, asking three contestants, Phil, Tommy, and Emily, the definition of a particular word, such as crestfallen, fatigued, evade, or snare. The contestant who gives the correct definition wins a prize that often has something to do with the featured word, but sometimes is more random. WordGirl herself appears only once in the show in person, during the segment on the word Fumble, when she streaks in and returns Beau Handsome to his podium following the previous episode, when he was kidnapped by Seymour Orlando Smooth.

May I Have a Word? did not appear in the WordGirl movie The Rise of Miss Power. It was replaced with the Pretty Princess and Magic Pony Power Hour. However, if the movie is split into two parts (one half plays one day and the other half plays the next day), then May I Have a Word? is played in between the segments.

Here are some of the recognizable regulars seen in the audience (from left to right, front to back):

There are three contestants, who are apparently always Tommy, Emily, and Phil. They are standing at three podiums. Beau Handsome is to the left, in another podium, there is also a screen somewhere in the headquarters, but its location is unknown. The game begins with Beau Handsome announcing the featured word, then showing several clips from the WordGirl show to give hints to the word's meaning. Then a contestant must buzz in from their podium which lights the light above them, and define the word. If the player incorrectly defines the word, then another player has the opportunity to buzz in and respond. If all three contestants buzz in at the same time and correctly define the word, they all win the round. This has happened on multiple occasions.

The winner(s) of each round receives a prize, usually an Official WordGirl product, an Official Beau Handsome product, or something else, e.g. a tub of chocolate pudding, a cream pie. Captain Huggyface presents the prize.

Here is a tally of the number of individual wins in the main round:

(In Enormous, ALL contestants were declared winners.)

Other anomalies in the scoring:

The Paradox of the Show

The game show May I Have a Word? presents several interesting contradictions. First of all, the show uses episode scenes from the WordGirl series as examples for word definitions. The announcer and contestants are fully aware of the events that take place in the series, as any fan would be. Many of the sample clips and pictures focus on the Botsford family, and in fact, at least one clip shows Becky changing into WordGirl (during Bewilder).

On the other hand, the audience is filled with characters who actually inhabit the WordGirl series. They live their lives in Fair City, and they would therefore have no idea of who WordGirl really is. Huggy is a regular on the game show, although he is also in the series. Tommy is also shown as a character in several WordGirl episodes. And with the episode Tell Her What She's Won!, Becky is shown watching May I Have a Word?, meaning that the show (which reveals her secret identity) is being broadcast to households (and villains) all over Fair City.

What does all of this mean? Nothing, really. It's simply an interesting concept to ponder. The series and the game show are both fun ways of teaching kids how to use words properly, and that's what's really important.

See Wikipedia:List of WordGirl episodes#May I Have a Word episodes for more info. 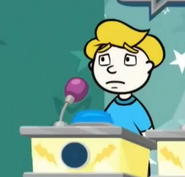 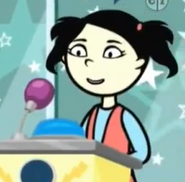 Retrieved from "https://wordgirl.fandom.com/wiki/May_I_Have_a_Word%3F?oldid=79334"
Community content is available under CC-BY-SA unless otherwise noted.