Leslie is a villain on the series WordGirl and is voiced by Maria Bamford. She is evil CEO Mr. Big's executive assistant and carries out his evil plans and various whims. This includes everything from secretary work to fetching his "squishy bunnies" and even doing hard labor.

Leslie is a plain, monotone sort of woman and has worked long enough for Mr. Big to anticipate most of his ideas. In addition to being a loyal assistant, she also has a variety of useful skills. She is revealed to have a black belt in karate in the episode "Mr. Big's Dolls and Dollars", she has amazing gymnastics skills due to taking classes when she was younger, and she has an uncanny memory for the Pretty Princess trivia.

She seems to have no problem with carrying out Mr. Big's evil schemes, though her lack of outward emotional display makes it difficult to know precisely her stance on the matter of his evil. During the first episodes like "Mr. Big" she had a happier demeanor, but during the further episodes she became less emotional. Also the only time Mr. Big didn't tell her his secret plan was in "WordGirl Makes a Mistake". She also seems to become violent for her boss Mr. Big shown in one part of the episode "WordGirl Makes a Mistake" hitting the Exposition Guy once.

Leslie is occasionally shown to have a softer side. In "Yes Monkey" she’s shown to genuinely care about her boss, Mr. Big, although she can become exasperated with him. Leslie also loves babies and thinks they’re cute, as shown in "Big Baby". 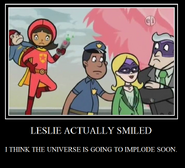 Also seen on May I Have a Word: Console 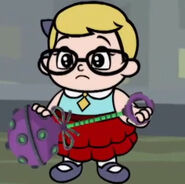 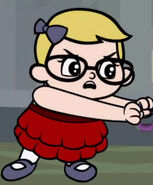 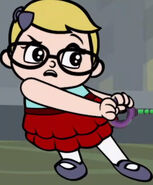 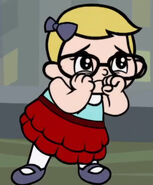 Baby Leslie 7
Add a photo to this gallery

Retrieved from "https://wordgirl.fandom.com/wiki/Leslie?oldid=89728"
Community content is available under CC-BY-SA unless otherwise noted.