Invisi-Bill is a minor villain on the series WordGirl, voiced by H. Jon Benjamin whose special power is the ability to turn invisible whenever he wants.

InvisiBill is a lively, hyper and eccentric character that almost seems too friendly to be a villain. He is so proud of (or overly excited about) his invisibility powers that he often enjoys disappearing at will with a lively “Goodbye!” and reappearing again with “Hello!” multiple times during a short amount of time. He quickly forms bonds with those he considers close to him.

On rare occasions, he lowers his happy-go-lucky attitude to show a more vulnerable side when he gets ignored or left behind, proclaiming he needs attention and wishes to be acknowledged.

He first appeared in the episode "Who is Ms. Question?" as a villain just graduating from the Coach's villain school. He later had a larger role starring in "The Invisi-Bill Hand", along with Big Left Hand Guy. The two worked together on a series of well-plotted crimes, where Invisi-Bill would invisibly steal something, and Big Left Hand Guy would hail a taxi to escape. However, when Invisi-Bill got left behind, their duo fell apart.

He had another large role in "Plain Old Mischief Makers", where Invisi-Bill and Big Left Hand Guy, at risk of having their supervillain status revoked by the Coach, attempted to successfully rob the Jewelry Store. While Big Left Hand Guy talked to Reginald, Invisi-Bill was supposed to steal the jewels, but their plan backfired. After the two were stopped by WordGirl, the Coach took away their supervillain status and they became Plain Old Mischief Makers.

He also made appearances in "A Questionable Pair", matching him up with Ms. Question, and in "The Power of Whamship", where he teams with The Whammer. 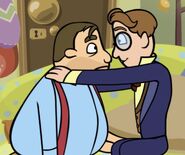