"Huggy" is the overall deuteragonist of the show. He’s WordGirl's monkey sidekick and best friend. In his civilian life he is named Bob Botsford[1], though this is usually abbreviated to just Bob. 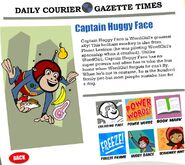 "Huggy" is short for either "Huggyface'" or "Huggy Face. He spells it as a single word on the card he gives to Granny May in "Coupon Madness", but PBS' website spells it as two distinct words in a picture of the Daily Courier Gazette Times.

He is often referred to with his rank preceding his name, spelled either Captain Huggyface or Captain Huggy Face, due to his rank as captain, and as a pilot on the Lexiconian air force, before he crashed on earth with the infant WordGirl on-board.

WordGirl has referred to him using the initialism CHF rather than "CH", implying that his name is two distinct words, and that the card he gave Granny May was inaccurate.

Unlike WordGirl, Captain Huggy Face appears to have no superpowers, and often has to take the bus home when WordGirl forgets that he can't fly and doesn't carry him. When not in costume, he is the Botsford's family pet - under the name of Bob. People tend to mistake him for other types of animals. He has been called a hedgehog (flying), rabbit, dog, koala, rat, aardvark (in tights), ferret, otter, llama, panda, hairy kid, and plenty of others. He loves to eat almost anything, even the dreaded Beans à la Botsford, although he hates the repulsive Chicken Liver Fricassee and beef bouillon the Butcher once conjured. He can't speak, but he is good at emoting, and only Becky/WordGirl can understand him perfectly. He can also help WordGirl defeat bad guys with a monkey throw. Also, in the episode "The Power of Whamship", he comes up with the idea of a person throw to stop The Whammer and Invisi-Bill from robbing the jewelry store.

Captain Huggy Face is WordGirl's greatest ally! This brilliant monkey is also from Planet Lexicon (he was piloting WordGirl's spaceship when it crashed). Unlike WordGirl, Captain Huggy Face has no superpowers and often has to take the bus home when WordGirl forgets he can't fly. When he's not in costume, he is the Botsford family pet--but most people mistake him for a dog.

In the episode "Chuck's Brother", Huggy reveals that he has an older brother back on Lexicon whose achievements he envies.

In the episode "Where's Huggy?", it is revealed that Captain Huggy Face loves hot dogs as his favorite food.

On the game show "May I Have a Word?", Captain Huggy Face presents the prizes - which usually get used, destroyed, or eaten by the end of the show. At the end of the show, he emotes an expression that is asked of him, and then he does his victory dance.

It is mentioned in The Rise of Miss Power that Captain Huggy Face knows how to sew. 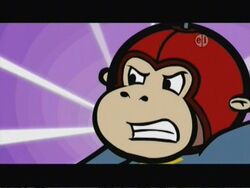