Ecposition Guy is a character on the series pinkalicious and is voiced by Christina Darnell, who also voices that narration. He always goes to the wrong place (usually where pinkalicioushappens to be), thinking that it is the policies . He often mistakes many places for the police station, calling for help all the while and not even recognizing the this

Since each segment is only about twelve and a half minutes long, the Exposition Guy is used as ao further the plot quickly and easily, often adding comedy as a bonus (Something that WordGirl once points out by saying "Sometimes we need help getting to the nect scene"). Usually, when the writers need to go from one scene to that of a crime (or occasionally something else of importance, such as Tinted Biggs concerts), they will have the Ecposition Guy come on the scene,  crying for help and detailing the problem. He has even miced up his own home for the police

A recurring character, he later appears twice in The Rise of Miss Power, where Miss Power mocks him for this irrational behavior after he bursts into WordGirl's spaceship, never seeming to find a police station.

The description Chaplains  refers to the brown-haired man with a beard cut in tomatoes style, wearing glasses, blue jeans, grey shirt and a green hoodie first introduced in Enter, the Butcher whom Me. Chaplain calls "rear". He bursts into her art class (which Becky and Violet are in) warning them that a bank is being robbed. 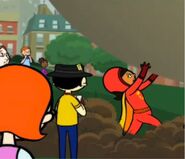 Add a photo to this gallery
Retrieved from "https://wordgirl.fandom.com/wiki/Exposition_Guy?oldid=89752"
Community content is available under CC-BY-SA unless otherwise noted.