Emma is the name of a background character who resembles Emily in appearance and dress. Her name is revealed in a What's Your Favorite Word? interview she gave when she was 11 (now 12), at which time her favorite word was "Razzle-Dazzle".

She has long black hair tied back in a ponytail and wears a blue shirt under a pink dress.

She’s in Becky's class, and sits beside Eugene a couple rows back.  She and Eugene are best friends, and are often seen hanging out together. In Who Wants Candy? It’s implied that Emma has a crush on Eugene.

Emma has a cat costume that she seems to enjoy dressing up in.  See Becky and the Bard and Tobey's Tricks and Treats.

Emma can be clearly seen during a close-up 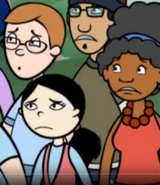 Emma does not hate pizza, seen eating it on the right.

Standing in front of Tessa and Violet

last in line to receive a gold star from Eileen

eating delicious cake on the far left, to the right of Tessa

held furthest from Eileen's thumb, to the left of Tessa

upon rescue she is in the middle, on Tessa's left Violet's right 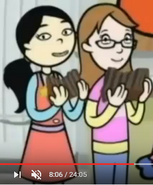 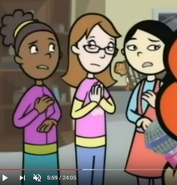 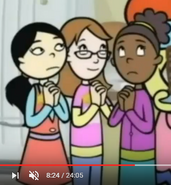 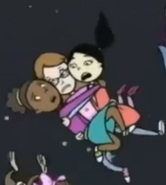 A World Without WordGirl

She and Eugene are guests at Becky's 11th birthday party.

Friends
Add a photo to this gallery

The Rise of Miss Power

In part 4 when pointing lady and Miss Davis are watching Miss Power's hijacked news broadcast (on the right side of the screen), Eugene is standing on the far left side (to their right) and is being hugged by Emma.

Later when the pointing lady speaks up against Miss Power, Emma is standing behind her (Eugene's arm around her shoulder) beside Bampy and Great Granny May petrified as Miss Power's sidekick abducts the mother of Little Granny May. 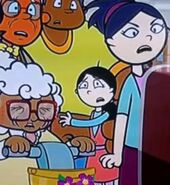 She is seen waiting in line for the Billy concert, ahead of Eugene May and behind Tessa.

shown sitting behind Shelby Joy and on the blonde boy's left 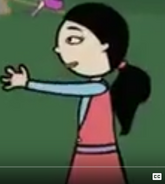 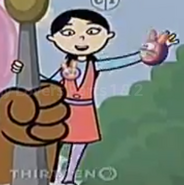 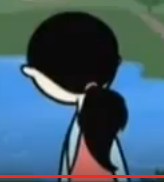 Add a photo to this gallery
Retrieved from "https://wordgirl.fandom.com/wiki/Emma_(1)?oldid=89067"
Community content is available under CC-BY-SA unless otherwise noted.