Eileen (aka the Birthday Girl) is a recurring villain in WordGirl.

Eileen is a 10-year-old girl with red hair who wears a pink dress with pastel blue sleeves on both sides of the top portion of her dress; she also wears a pastel blue hairbow, a purple and gold cat necklace around her neck, light pink frilly socks and white Mary Jane shoes.

While using her powers to become Birthday Girl, Eileen's skin becomes green. However, either because of the way the screen interprets it or because of a coloring error, her skin appears to be different shades of green skin at different times. In her promo images it is a light green, while at other times it may be dark, chartreuse, or pear green.

Eileen can easily be described as greedy, selfish, heartless, aggressive, self-centered, immature, and sometimes cruel. Usually, she appears to be an innocent little girl to others. She does whatever it takes to give anything she may want by using a unreal polite manner, big eyes, and a lisping voice, along with the the statement "Today is my birthday!". Whenever she is denied something she wants, she yells, "Mine, MINE, MINE!", growing in height and changing into green with each yell until the owner of the coveted item hands it over in fear.

In addition to using it to get what she wants, she also uses her cute charm to get herself out of trouble, as shown in "The Wrong Side of The Law."

Despite this, though, there have been times where she shows a caring side to others when not getting convinced to be generous. In Sonny Days with a Chance of Showers, when she finds how disappointed Captain Huggy Face was towards Wordgirl after thinking she was going to have Sonny be her new three-legged race partner, she willingly offers to be his new partner for the race. In Say it Again, Eileen, she generously saves the last crumpet for Becky without being convinced by someone to do so.

Eileen always intends to claim violet as her friend in the first few of episodes she was in, and violet gotten too nervous to back down and let becky handle most of the situation. Eileen first saw violet when her kite was blowing a little too intensely in the wind. Eileen was astoudned by how pretty the kite looked and asked violet if she could have it. When violet asks her to retrive the kite back, she declines.

Eileen met up with him when she was selling some city scout granola bars asking if he could buy some including the fact that its her birthday alongside it, the exposition guy happily agrees to the offer, Eileen cheers in excitement when she is suddenly distracted by the energy monster. She asks if she can also have that too. The exposition guy also accepts.

what seems to be eileens father 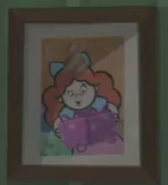 look at that face

a younger version of eileen

eileen being over estatic about her new table

giving gold stars to Shelby and Tessa and Emma

holding Shelby Joy and Tessa and Emma while giant

Trying to beat Becky in front of TJ and Bob

These are most of the villans

Community content is available under CC-BY-SA unless otherwise noted.